LAND COVER DISTRIBUTION – Long-term observations in the VCR LTER site have shown that the intersections between non-parallel “free surfaces” including sea level, land elevation, and the groundwater table determine the distribution of land cover types such as upland, marsh, and mudflat. As changing climate conditions alter the relative positions of these free surfaces, land cover and habitat distribution will change in a predictable way. 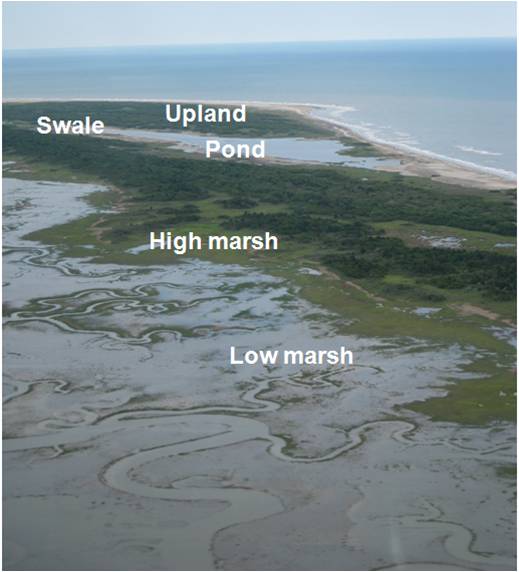 In coastal barrier landscapes, the distribution of land cover types depends on the dynamics that control geomorphology (e.g., sea-level rise, overwash frequency) as well as the geomorphology itself (e.g., land elevation, island area). Long-term observations of land cover and ecosystem dynamics in the VCR LTER site have demonstrated the key role played by the relative positions of sea level, land elevation, and the groundwater table in land cover distribution. Conceptually, these three environmental parameters may be considered in the physics-based context of “free surfaces,” or mobile interfaces across which fluxes occur and, in this case, at which all systemic changes originate.

The geometric relationships between these three free surfaces vary over a range of spatial and temporal scales due to land subsidence, sea-level rise, and the redistribution of sediment by hydraulic (wave- and current-related) and aeolian (wind-related) processes. The effects of these dynamic relationships on land cover distribution influence vegetation zonation, habitat availability and heterogeneity, ecological succession, and ecosystem state change.

On barrier islands, for instance, the vertical distance between the land and sea surfaces controls the size and position of the freshwater aquifer. At high elevations relative to sea level (arid dunes), the distance between the land surface and the groundwater table is great enough that only xeric species (e.g., beach grasses) can survive. Maritime forests and shrub thickets occur at intermediate relative elevations – high enough to limit flooding, but low enough that 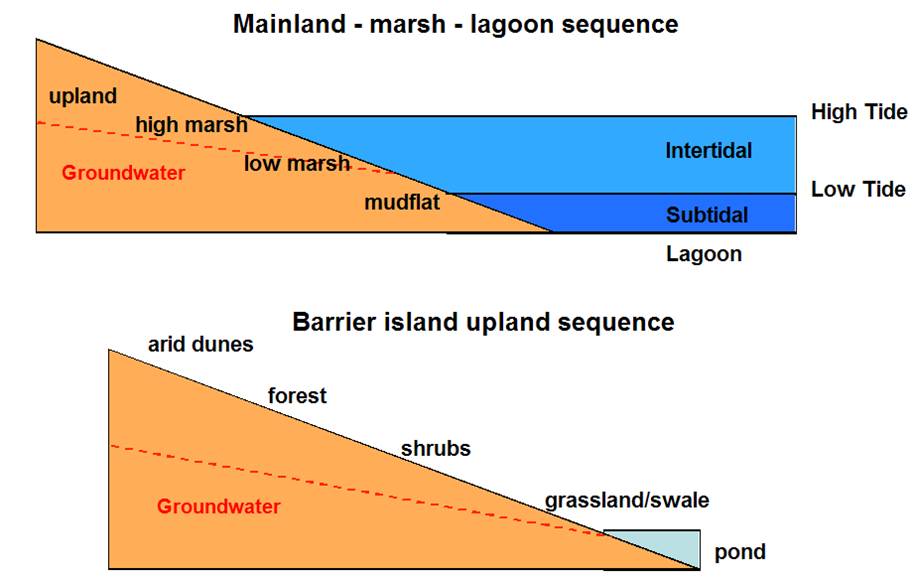 depth to the groundwater table does not limit water availability. Where the land surface and groundwater table intersect above sea level, ponds and swales dominated by flood-tolerant species are present. When this same intersection occurs at or near sea level on the lagoonal coast, tidal salt marshes develop; on the oceanic coast, this intersection occurs below the high tide line on the beach. Barrier islands that are large enough to include this full range of free surface geometries and thus, land cover types, tend to have the highest species diversities as a result.

Along mainland coasts, land cover types (upland, high marsh, low marsh, and mudflat) progressively migrate landward as the intersections between high tide, low tide, the groundwater table, and the land surface are progressively driven inland by sea-level rise. Gradual changes in the relative positions of the free surfaces eventually exceed ecological stability thresholds, causing abrupt state changes (e.g., the conversion of low marsh to mudflat or upland to high marsh as sea level rises). As a result, coastal barrier ecosystems rarely reach an endpoint in ecological succession; rather, they are constantly redistributed across the dynamic coastal landscape, a process that is likely to accelerate in response to the effects of climate change on free surface geometry.