COASTAL MARSHES AND RISING SEA LEVELS – Twenty years of VCR research has revealed how the response of marshes to sea-level rise varies depending on vegetation type, landscape position, and sensitivity to disturbance. Understanding this variation is critical to predicting how sea-level rise will affect the diversity of waterbirds, marine invertebrates, and fin fishes that depend on marshland habitats.

Tidal marshes play a vital ecological role in coastal landscapes. They act as a filter for nutrients and pollutants from the land and provide habitat and food for a variety of species important to conservation. As sea level rises, marshes can maintain their relative elevation through vertical accretion: increased tidal flooding of marshes leads to increased deposition of sediment, gradually building up the surface of the marsh. In this way, marshes 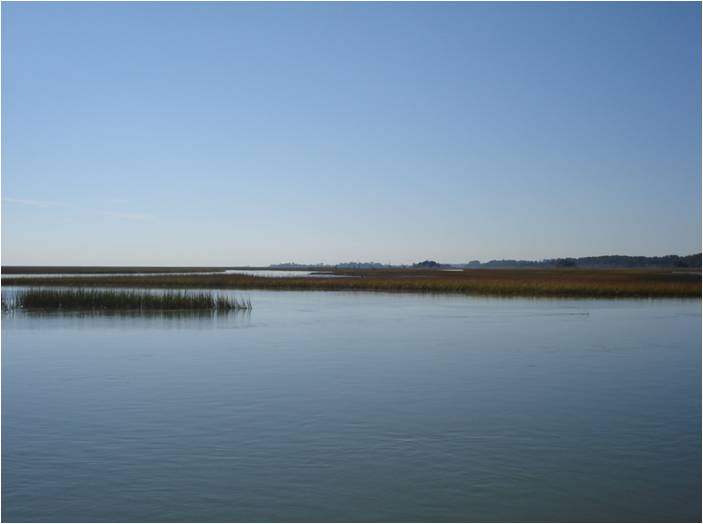 can mitigate the effects of relative sea-level rise on coastlines. As the rate of sea-level rise accelerates, however, vertical accretion in marshes must also accelerate if these landforms are to survive. 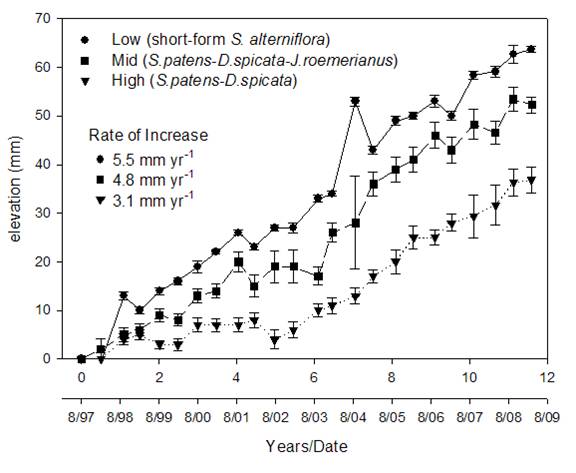 In the VCR, long-term (20-year) observations have demonstrated that hydrologic drivers (e.g., waves, tides), measured at time scales from hours to decades, cannot solely explain inter-annual variation in the rates of marsh elevation change. Rather, VCR researchers found that the long-term response of marshes to sea-level rise is related to complex vegetation feedbacks, thresholds of disturbance tolerance, and landscape position (e.g., fringing the mainland, backing barrier islands, or isolated in the lagoon). In mainland marshes, the species-specific resilience of marsh plants to increasing tidal inundation and disturbance modulates the response of the ecosystem. High and low marsh zones within mainland marshes resist change until critical thresholds are exceeded, forcing them to migrate landward onto the upland slope. In spite of being relatively isolated from tidal influences, mainland high marshes have kept pace with local rates of sea level rise.

In contrast, comparatively low-lying lagoonal marshes are closely connected with tidal cycles, yet appear unable to maintain their relative elevations above the rapidly rising local sea level. Because the lagoonal marshes are not adjacent to uplands, there is no possibility for landward migration; ultimately, this will lead to their disappearance. As sea-level rise accelerates over the next century, habitat loss could be significant for more than 60 species of waterbirds that feed or roost in the marshes of the VCR, as well as for numerous marine invertebrates and fin fishes that depend on marshes for nursery habitat and food.

Caption: A tidal marsh within the VCR LTER site.

Caption: Mainland marsh surface elevation changes in the VCR LTER site. Each of the three zones (low, mid, and high marsh) is associated with a distinct, characteristic plant community. Rates of elevation increase in the three zones are similar to or greater than the rate of local sea level rise, and are adequate to maintain the relative relationship of the marsh surface to changing sea level.