Tidal marshes, a key ecological component of coastal barrier landscapes, are especially vulnerable to erosion under changing climate conditions such as rising sea level and increasingly frequent, powerful storm waves. The close coupling between tidal marsh ecosystems and physical processes has motivated VCR scientists to investigate both the driving forces behind erosion and the unique, spatially variable mechanisms by which erosion takes place.

Quantitative hydrodynamic models of the VCR lagoons have shown that the power of waves impacting a given marsh varies with wind direction and the azimuthal orientation of the marsh’s edge. As a result, marsh erosion is likely to be non-uniform throughout the system as a whole. However, long-term marsh shoreline analyses have shown that within a single lagoon (Hog Island Bay), marshes experiencing similar wave power at their edges have been eroding at significantly different rates over the last several decades. Therefore, while wave attack is the dominant erosive force in this system, waves alone cannot explain the spatial variability in marsh erosion. 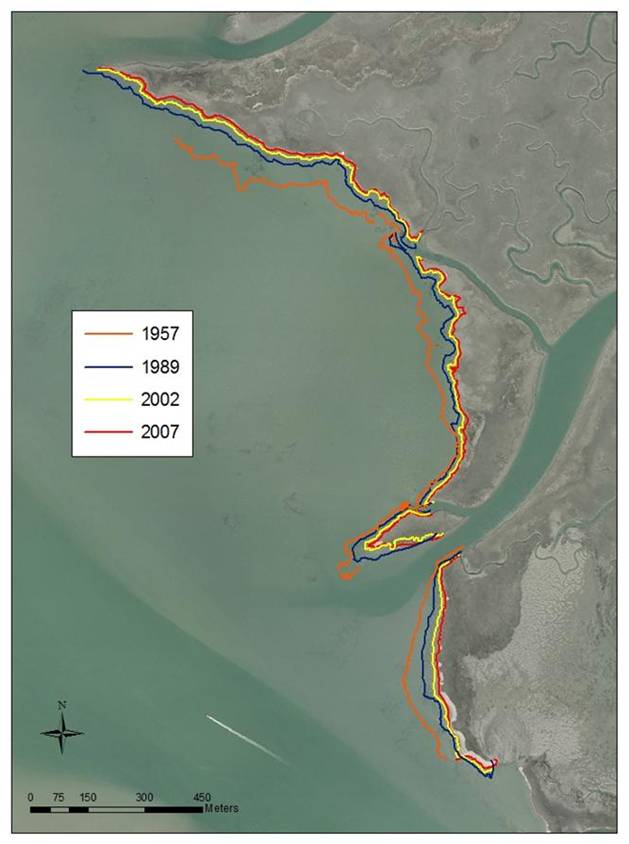 Extensive field surveys have demonstrated that in addition to external forces (waves), internal characteristics of marsh edges also influence erosion rates by controlling site-specific mechanisms of erosion. In contrast to previous studies that have considered only a single internal property (e.g., sediment size), VCR researchers have found that a range of interacting characteristics including marsh edge morphology, sediment size, the abundance of plant roots, and invertebrate activity can contribute to erosion in heterogeneous marsh systems. For instance, where muddy, cohesive sediment and extensive crab burrowing coexist at the marsh edge, erosion takes place through the cracking of the marsh platform where burrow densities are the highest (i.e., at its weakest point), resulting in the detachment or slumping of large blocks. Where sandier, less cohesive (more erodible) sediment underlies a dense rootmat, undercutting and the subsequent toppling of the rootmat create a scarped marsh edge. However, if a dense rootmat is underlain by muddier, more cohesive (less erodible) sediment, waves scalp the rootmat before the underlying sediment erodes, producing unvegetated terraces at the marsh boundary.

As sea level rises, larger waves are likely to develop in depth-limited systems like the shallow coastal bays of Virginia, leading to a general acceleration of tidal marsh erosion rates. In the VCR LTER site, interactions between internal marsh characteristics will play an important role in determining specific rates of marsh loss and, ultimately, which marshes survive in the face of changing climate. 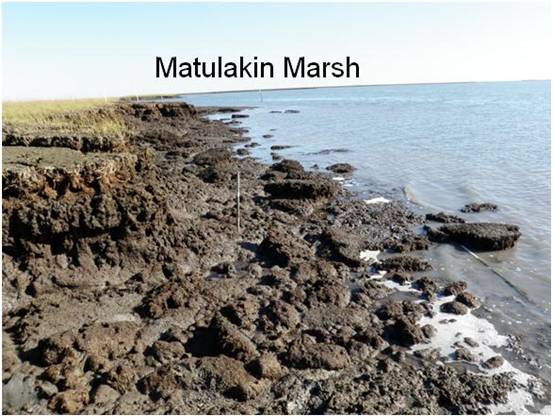 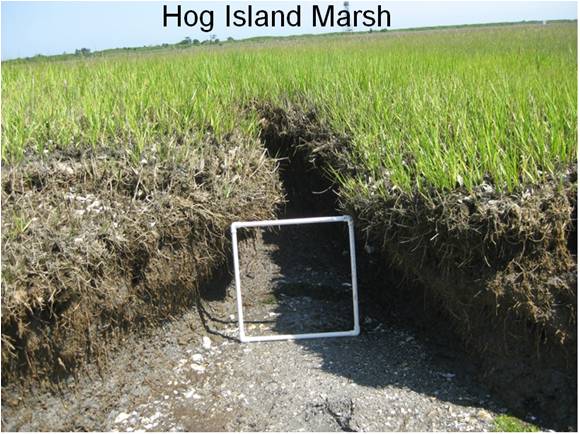 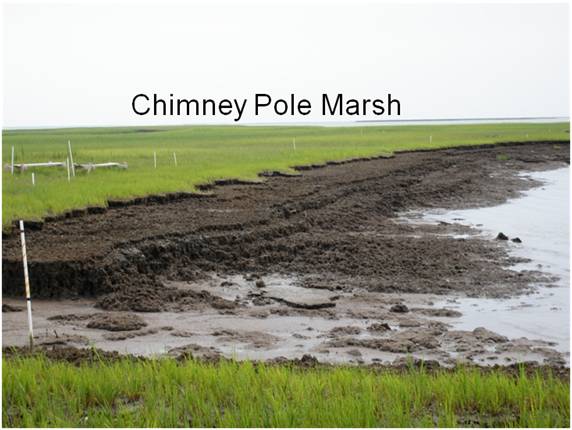