REGIONAL SHORELINE CHANGE – Researchers at the VCR discovered that long-term changes in the positions of barrier island shorelines follow remarkably similar patterns across the U.S. mid-Atlantic coast, suggesting controls by common regional factors. The last major shift in shoreline trends, for example, dates back to 1967 and coincides with an increase in the frequency and severity of coastal storms. 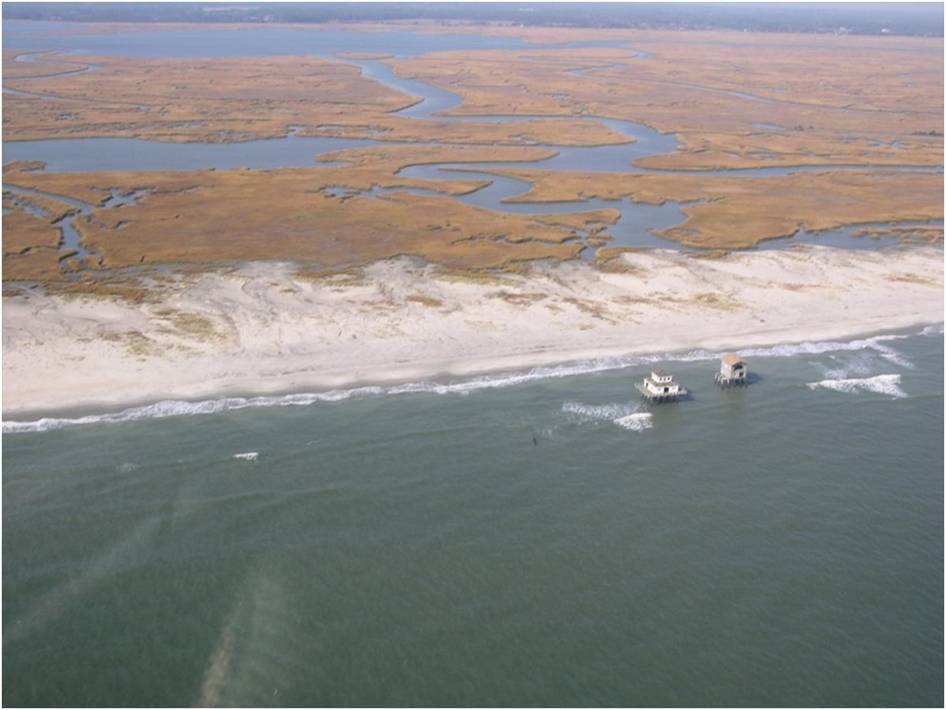 Barrier islands on the U.S. mid-Atlantic coast are characterized by dynamic patterns of shoreline movement. Erosion and accretion driven by episodic storm events, gradual sea-level rise, and natural or engineered changes in sediment supply occur at a variety of temporal and spatial scales, with significant implications for coastal management.

VCR researchers were among the first to show that simple linear models of shoreline change often used in management projects generally cannot accurately capture long-term trends. Non-linear analyses showed that a major shift in long-term shoreline trends occurred contemporaneously for barrier islands from New Jersey to Florida in 1967 (on average), most often in the direction of increased erosion or decreased accretion. The widespread nature of this shift indicates that large-scale processes control shoreline change in the mid-Atlantic region. This shift coincided with a peak in the frequency and intensity of extra-tropical storms (nor’easters), suggesting that redistribution of sediment by storm activity may have triggered a systemic state change across the mid-Atlantic. 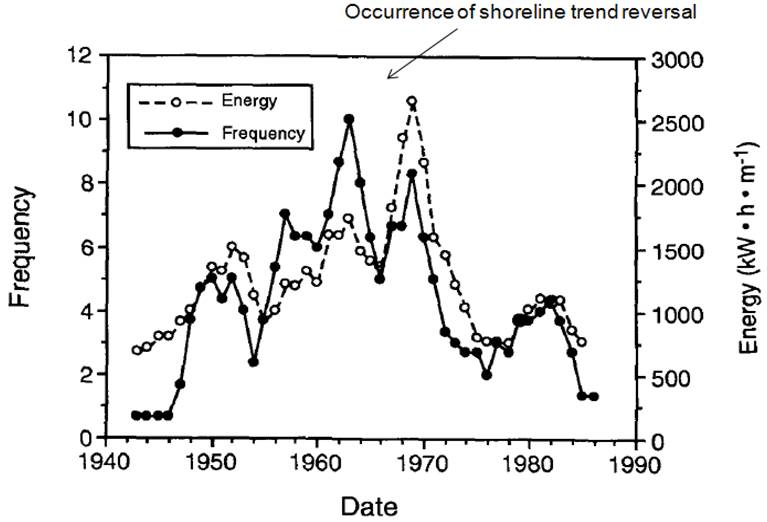 Furthermore, contrary to expectations based on simple linear models, VCR researchers have demonstrated that extreme shoreline positions produced by major storm events should not be discounted as “outliers” in analyses of long-term change. Rather, including these extreme data points can actually increase the predictive power of shoreline change models.

In dynamic barrier systems, major storm events are drivers, rather than deviations,in long-term shoreline trends. As storm frequency and intensity increase with climate change, shorelines in coastal systems like the VCR will likely continue to change non-linearly, forcing corresponding changes in the distribution and diversity of barrier island ecosystems.

Caption: Changes in storm frequency (left axis) and intensity (right axis) for the mid-Atlantic coast (including the VCR LTER site) over time. Both frequency and intensity peak around 1967, the average date of a major shoreline trend reversal in the region. Storms play a key role in barrier island movement and shoreline change.

Source: Modified from Fenster and Dolan, 1994.